Top of the World Restaurant

It may feel like you're making your way across the universe to get here, but soon you'll be on top of the world. 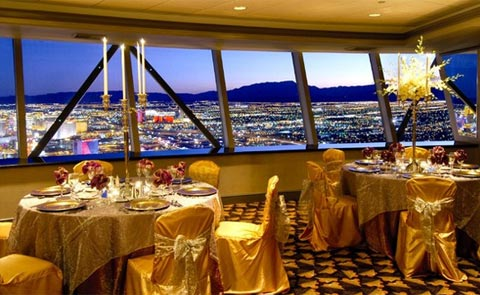 The Bellagio has our favorite upscale restaurants in Vegas. Because they come with a free fountain show. We like free!

Of all the upscale restaurants in Vegas, you probably can't go much better than the ones in the beautiful Bellagio. There's no better way to charm a ladythan at a Las Vegas fine dining experience with a view of the Bellagio Fountain shows.

Don't leave your jacket and tie at home when you eat here, and we aren't talking about your leather Harley jacket.

Upscale restaurants in Vegas are known for more than just burgers and fries. They have cuisines from all over the world.

Las Vegas brings the best from all over the world into one city. They've recreated New York, Paris, Italy, and give you foods from even more places than that. When you can't travel to every country in the world, go to the Vegas upscale restaurants to still experience all the worldly cuisines.

Upscale restaurants in Vegas aren't as rare as they are in many places. People come here on vacation to get the luxury treatment, and these restaurants give you that to say the least. Don't think that just because they are charging high prices you're going to get a fancy fine dining Vegas meal though. Some places just charge a lot because they think they can, even though the food doesn't fit the price.

Whether you're looking for an exclusive upscale restaurant in a fancy Vegas hotel or a more casual fine dining Vegas experience, there are options all over the Strip, Downtown or Off-Strip, but you should probably stick to the Vegas Strip if you want the really nice meals.

Some think that a nice meal is made of good food. But we think the food is good at the buffets too. So it takes a lot more for to make us want to drop extra dough. We need things like fountain shows at the Bellagio, dim lighting, sommeliers and fancy dishes we can't even pronounce.

Some of these Las Vegas luxury dining places require fancy pants, meaning have dress codes, so make sure you know before you go. You don't want to show up looking worse than the waiters. Or the bums sitting outside. Also, it might be a really good idea to know how much you can spend before you reach your credit limit before you go too.