Head underground and pick your poison at Body English, the intimate Vegas nightclub and afterhours venue. 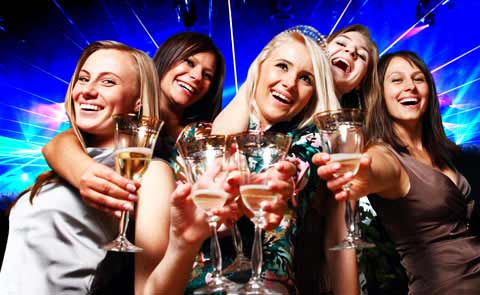 Most Popular Clubs on the Vegas Strip

Here is a sample of the best nighclubs inLas Vegas Unless you hate fun, then avoid these joints at all costs!

This newly remodeled hot spot has the best views of the Strip. Good lookin' people and a see-through floor!

Even people Downtown like to party. Hey, there's Las Vegas nightlife around every corner.

Las Vegas Nightlife is legendary to say the least. Everyone has a wild story of a chance celebrity encounter or memories of dancing to the beats of the best EDM DJs in the world. Patrons roll into town to hit the best Las Vegas nightclubs all weekend long. There are some more tame Las Vegas bars and lounges for those of us who would like to be in bed before 4am. Waiting in line is a total buzz kill and we're too cheap to be slippin' Benjamins to the bouncer. But, there are some VIP nightlife companies that can manage to get Casino Boy to the front of the line with some Vegas nightclub passes at the best Las Vegas clubs on the Strip.

Why do you come to Vegas? To gamble,  drink, and meet crazier people than you thought could ever exist? Whatever reason you have for visiting Las Vegas, nightlife in Vegas is full of adventure and surprise. You never know who you'll meet or what you'll see and experience in all of the bars, lounges and clubs. They know you came here to have the time of your life, so every place that hosts nightlife in Vegas is committed to trying to be the best in their trade.

Yeah, some of the Vegas nightclubs are known for the meaner-than-average bouncers who don't let the boys in promptly or keep the girls from taking off their shoes when they've danced too hard. Most of the places charge a lot for small drinks, but some have a lot of kick in their small packages...even if bigger is usually better. The most popular nightlife in Vegas are places all over the Strip, and these are the places that can get away with charging an arm and a leg to get in the door and get drunk while you're there. In Vegas, shelling out a few bucks to get into the best Vegas clubs for “free” may be worth it.  There are a handful of club promoters that offer VIP club passes that include  no wait, no lines, no cover and even transportation to and from clubs, free drinks for the ladies (sometimes the guys too), table and bottle services and more.

The dance clubs in Vegas are known for their elaborate and glamorous venues. Everything in these places is expected to be over the top and the best venues don't usually disappoint. Well, they disappoint the Cheapos that are expecting to get drunk and all the girls that wore less than usual and still have to pay for their drinks. The lounges on the Strip are usually glamorous as well, and the ones everywhere else are more laid back. There are bars of all sorts to choose from. Whatever you're in the mood for, there's something here. Possibilities for nightlife in Vegas are endless. Endless as in, you won't have to stop partying the whole time you're here.

Make sure to save some money so that you can do nightlife in Vegas the right way by saving with Cheapo Vegas! We have plenty of special hotel deals and promo codes just waiting for your use.