The famous DJs, light show and go go dancers might put you in a haze too. Oh wait, that's probably just all the alcohol.

These are the places with tons of people, inside and waiting in line. Get on the list or be beautiful to get in.

This nightclub is the best club in town on Sundays and super popular on holidays. Everyone has to tip to get in though. 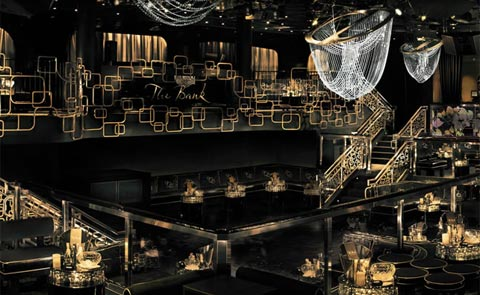 In case you're drinking and dancing too much and too hard, and forget where you are, look out and see the Vegas Strip.

Las Vegas nightclubs are notorious for being hot and sweaty in the best possible ways. People pile in, pay ridiculous cover charges, then again ridiculous amounts for drinks and tables, and hopefully land a hottie to dance with until morning. Some nightclubs in Vegas are pretty standard, and some are just plain must-sees. Whether you remember it the next morning or not is the real question.

When the Las Vegas clubs start up for the night, some people start to get drunker than they did the night before in the sports book. Why go to Vegas unless you're going to go to a rowdy club and get sweaty with tons of strangers on the dance floor? Well, there might be other reasons, but if you're young and like to party, you're probably all over this scene. Las Vegas clubs get poppin' from open and usually stay busy until they're kicking out the last of the staggering clubbers.

Nightclubs in Vegas range from quiet and off the beaten path to wild, extravagant parties. Most people opt for the second choice. It's Vegas, so you might as well put on your fanciest digs and join the party. You might make some new friends, even if you don't remember their names in the morning, or spend all of your money on drinks at the bar. We're pretty sure what they mean by that phrase "What happens in Vegas stays in Vegas" pertains to getting drunk in the club. You spend lots of money and you have none when you leave, and you might be too drunk to even remember the whole experience. As long as you know you still had fun.

The best and most popular nightclubs in Vegas are generally found on the Las Vegas Strip. People usually mingle here day in and all night long, so these clubs get the most action, as you'll see from the long lines of people waiting to get in. You have to either get there early, get on the guest list, or tip someone really well if you don't want to wait in line all night. All the Las Vegas nightclubs have waits though, and make sure you know before you go that unless you're a pretty girl, you'll be waiting with everyone else. Don't worry, we don't bite.