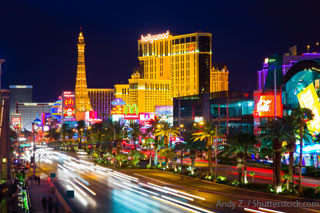 Ever wonder how Casino Boy's favorite city came to be? (History Lesson ALERT!)

We all love Sin City (well, it's a love/hate relationship mostly - our heart and soul LOVES Vegas; our liver and bank account despise it), but it wasn't always a glittering paradise in the middle of nowhere. Vegas has a sorted history, from a Mormon-funded desert town to a beacon of organized crime - a natural progression, if you will. Starting out as a small railroad town, over the past 150 years this desert oasis transormed from a major hub for crime, gambling and parties to, well ... actually that still fits pretty perfectly. Anyways ...

Las Vegas means "the meadows." Shocked?  We were too. We don't see any meadows in Vegas besides the huge golf courses that have sprung up all over the place. Sure - it's a watering hole, but we're pretty sure green grass doesn't grow from vodka tonics. Surprisingly enough, the Las Vegas valley was so named in the 1800's when it was discovered as an oasis in the middle of a barren desert. Mormon missionaries decided it was the ideal location to link Salt Lake City and Southern California via railroad, so this little town became a mecca for railroad workers and agriculture in the early 1900's, but it wasn't until the 1930's that it really started to boom*.

In 1930, under the direction of President Hoover, construction of the Hoover Dam (originally called the Boulder Dam - MAN that Hoover was an egomaniac ... ) had begun. With this, an influx of workers flooded little Las Vegas Valley and, since most of these workers were dirty, smelly men, the demand for some major entertainment hit was only natural. Up popped showgirl theaters (real original, guys) and hotel casinos like the Northern Club and Fremont Hotel opened for business.

Naturally, crime wasn't far behind. Mobsters and riff-raff love the naked ladies (Casino Boy falls into the latter category, for the record.), and Vegas provided enough male-focused entertainment to keep the big timers amused and the Mormon financiers busy.

Related:  Beautiful pic on Wikipedia of the Vegas skyline at night.

During the war, the United States Army built a gunnery school in Vegas and quickly cracked down on prostitution in the area. (Total buzz-kill, but we get it.) The famous red light district, Block 16, was shut down in 1942, and an attempt was made to clean up Sin City (obviously a real success).  For years the hotels were owned by hard-core Vegas locals (i.e. Casino Boy's ancestors), but that began to change toward the end of the 1940's. (This is probably where you call Casino Boy a 'sell-out' again. Guys, seriously - this isn't the '90's.)

After the war, gangster Bugsy Seigel and mob boss Meyer Lansky opened The Flamingo (inspired by Bugsy's long-legged mistress) in 1946.  (Good thing he didn't call it the Walrus, amiright?). This spawned the growth of big hotels like the Tropicana and Sands, owned and operated by known organized criminals. The amount of money being pumped into the city through gambling halls was huge, and stars like Elvis Presley and Frank Sinatra began performing all over Las Vegas, further solidifying it's reputation as the "entertainment capital of the world". (And yes - we're over this self-proclaimed title, too.) It quickly became a HUB for all forms of entertainment - innocent and otherwise - and Sin City became a top destination for all kinds of people looking to get away from reality, and get into some trouble.

In the 1980's, Vegas started to become the monstrosity that it is now. Mega-resorts sprung up along the Vegas Strip starting with the Mirage, and the Strip quickly surpassed Downtown as the "place to be" in Vegas. (El Cortez and Fremont fans, feel free to air your disdain for that previous statement in the comments section below.)

Over the next 30 years, huge clubs like HAZE and Surrender became the (quote) "best places to party in Vegas" and hotels began competing to be the biggest and best in town. Granted, we're not complaining; how do you think beaches and amusement parks ended up in Vegas? It's all about competition. (AMERICA! CAPITALISM! Sorry ... We just got back from an NRA rally. We're not political or anything; they just serve GREAT finger foods at those things.)

To sum it all up, thanks to religious money and the mobster lifestyle, our favorite city became the number one party destination for drunken oafs like Casino Boy. From Vegas strip clubs (and beyond), to the Blackjack tables, high rollers slots and, well, just about anywhere else your eyes wander, there are still plenty of ways to get in trouble in Sin City. Just take a look around the corner if you don't believe us ...

Did you mean "sordid" history?