NBA Sports Betting: Getting Paid During the Regular Season 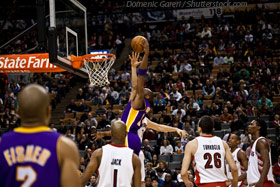 It's official: the NBA season has begun Cheapos... and so has the time for NBA sports betting in Las Vegas! Casino Boy has been waiting for tip-off since those guys from South Beach showered in NBA Finals glory and now it's finally here: a new season and another chance to win big on a FULL 1,230 regular season games!

Before we get into our picks for the regular season, let's quickly go over how NBA betting works. If you're familiar with NFL sports betting then you're ahead of the curve and can probably skip this (well, look at you!). Just like football betting, to win BIG money you're gonna have to consider more than which team will come out with the "W". The highest payouts are for covering a point spread or an over/under on the point total. So for example...

A bet on last night's NBA tip-off game between the Boston Celtics and the defending champion Miami Heat could have been placed three ways:

So without further ado, let's take a look at a few teams that Casino Boy will be responsibly placing bets on throughout the regular season and up until the playoffs next spring.

Is it the the same way for NFL and UFC betting games?

Thanks,
Justin of Dynamite Sports Picks

I am playing sports bet at Dynamite Sports Picks, yet I want to get updates from Casino Boys to see if I am within the accurate results, just a bit of transparency perhaps.

Hi! Do you use Twitter? I'd like to follow you if that would be okay. I'm definitely enjoying your blog and look forward to new updates.