User Rating based on 7 reviews 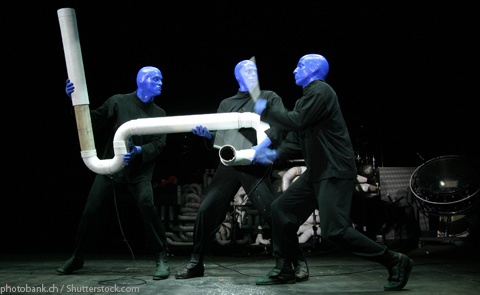 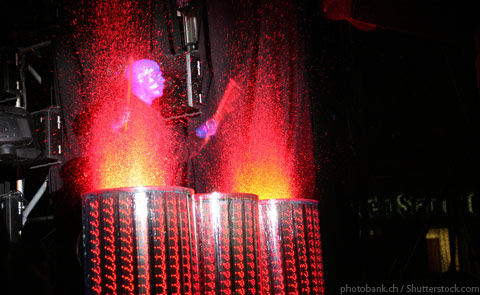 Not what you're looking for? Check out more Family shows!

The Blue Man Group Las Vegas has been around for years now. For a Vegas show with no talking (or nudity), there must be something good if people keep coming around. The subtle comedy and the powerful music is more than enough to keep the family entertained at least once, and Blue Man Group discount tickets are available all over the place!

This show made no sense to me. It was like a 5 year old was telling everyone what would be cool to do on stage to get people's reactions for. I was a big fan of the music during...
Mishilicious
Apr 26, 2010
What an incredible show. I had heard of Blue Man Group and thought I was familiar with what the show was all about after seeing a few videos, but seeing these guys live is...
chuck
Apr 10, 2010
Write a review

Running Time:
90 minutes with no intermission

Like many Vegas shows, there is plenty of audience interaction at the Blue Man Group Las Vegas. There are great opportunities to feel like you're part of the show, whether you're front and center or in the last row. Among the comedy skits and musical numbers Blue Man Group Vegas puts on, they bring up audience members to enhance the performance. Volunteer your friends or get in the action yourself, you will have a way better time watching them than watching someone you don't know make a fool of themselves.

Blue Man Group Las Vegas has been around for quite some time now, but if you haven't seen it, you don't know exactly what goes on there. You get an idea from your friends, commercials, and ads, but you never know what a show with no talking is all about until you experience it yourself.

When you go on vacation, you're always scared of coming back to a house covered in TP because the kids got just as wild as you did in Vegas, but you never thought that you'd be the one getting TP-ed during your vacation. At the Blue Man Group Las Vegas show, toilet paper flies through the theatre and by the end everyone is covered in white, just like Christmas came early.

It's worth seeing once, especially if you find great Monte Carlo promo codes for the show. Your kids might enjoy it more than you though.

Mishilicious Would Not recommend to a friend

This show made no sense to me. It was like a 5 year old was telling everyone what would be cool to do on stage to get people's reactions for. I was a big fan of the music during the show but there was no story line and it was a basically a whole bunch of gross stuff. I kind of fell asleep during part of the show, and some of it was really hard to watch. I didn't really grasp the concept of the whole thing, and while it was "really cool" to watch, it didn't mean anything and none of it was particularly memorable.
Overall:
4
Acting:
4
Ambience:
4
Production:
5
Story:
3

chuck Would recommend to a friend

What an incredible show. I had heard of Blue Man Group and thought I was familiar with what the show was all about after seeing a few videos, but seeing these guys live is EPIC!??Nothing like what I was expecting. Its a blend of music (rock/industrial/techno is how I can best describe it), magic tricks, and comedy. Its a great show for all ages little kids will laugh at the Blue Men destroying Twinkies with their power tools and making art out of marshmallows. The adults will enjoy the "how to be a rock star" skit. Theres audience participation incorporated, which always makes for excellent entertainment! We sat in the second row.. that's the splash zone. But, don't worry, ponchos are provided.??The theater design is awesome, the seats are comfortable and the ushers are very helpful...its dark. One caution: the music is LOUD, but it I think that is what makes the show even better.
Overall:
3.5
Acting:
4
Ambience:
4
Production:
4
Story:
2

jasson Would recommend to a friend

Loved the Blue Man Show. This is high tempo percussion driven entertainment. If you don't like drums, this is not your show. The visuals are out there, something completely different. When you come out of Blue Man your heart is pulping and the adrenaline is flowing. I thoroughly enjoyed it.
Overall:
4
Acting:
4
Ambience:
4
Production:
4
Story:
4

OscarMuno Would recommend to a friend

I had the opportunity to go see the Blue Man Group with a business associate of mine while I was in Las Vegas earlier this month. Because of what we had heard about this show, we both had high expectations and our expectations were met! It was incredible. It is a very episodic show meaning that segments could be switched in and out easily. I highly suggest buying the art that they make during the show. I think it runs about 50 bucks but it is worth it. Overall, a great time for all-
Overall:
3.25
Acting:
4
Ambience:
3
Production:
4
Story:
2

toka Would recommend to a friend

Yes, the men are blue in the Blue Man Group and definitely funny without talking. Fun for the whole family, the show is intensely exciting with anticipation. You will laugh even though no one is speaking because they are hilarious, and top with great music, lighting, and stage effects. The theater is nice and small because the show is visual so you have to be able to see the expressions and movements. Great show, visually stimulating, and entertaining!
Overall:
3.25
Acting:
4
Ambience:
3
Production:
4
Story:
2

jenni Would recommend to a friend

The show is visual so being close to the front would be better. The performance, music, lighting, and stage effects are good but the price is not. The show will keep you well entertained the whole time. It is amazing that those guys can be hilarious without a word being said. My son liked it so much that he even asked for their autographs and had pictures taken with them. It was a fun family show.
Overall:
3.5
Acting:
4
Ambience:
4
Production:
4
Story:
2

etbt760 Would recommend to a friend

This is GOOD FAMILY ENTERTAINMENT!!!! It was priced a bit more than what we are used to paying but worth it. We had front row/center tickets and arrived 5 or 10 minutes late (not a good idea to have those kind of seats and arrive late). I chose not to wear my poncho which was another not so good idea, and got from the banana!! That taught me a lesson!\It was a really fun evening for the entire family. I recommend everyone seeing the Blue Man Group at least once in their lifetime and remember to wear that funky little poncho that they supply you with!
-->